Don’t you just love that word? It’s the title of one of those bad films that’s supposed to be so awful it’s good. It was written, directed, and produced by a man named James Nguyen, who took the movie to Sundance, even though the jury had—wisely I’m sure—already rejected it. Nyugen drove a van around town with a poster that misspelled the title but gained him enough attention that Birdemic is actually playing in selected theaters around the country.

Inspired by The Birds (eat your heart out Alfred Hitchcock), it takes place in a small California town randomly attacked by violent birds that rotate 360 degrees in the air, spit acid, and explode when they dive bomb into the ground. This is the kind of movie I want to enjoy without spending ten dollars of my hard-earned money to sit through, not to mention ninety minutes of my life that I’ll never get back.

Still, I’ve had my own Birdemic at home over the last couple of weeks. Minus the aerial acrobatics and the impact detonations, mine arrived in the form of a female cardinal that has made a nest just outside my kitchen window.

Every spring, similar dramas seem to play out around here, begging me to write about them, which I'm doing right now. Last year, a field mouse parked itself on my front steps and bedeviled both of the cats inside my screened-in porch. The year before a mother cat gave birth to three kittens under my back porch, much to the screeching disapproval of my and the neighbors’ felines.

This year, it’s the bird. My younger cat Serene—she’s just two—is enthralled. She sits at the window morning and night, so mesmerized that she often forgets to eat. Her focus is admirable. I envy her. As I watch her and the little mother-to-be, I try to imagine what they might be saying to one another (pardon the anthropomorphizing).

“You can’t touch me, sucker,” chirps the bird.

“I want to eat you,” replies Serene.

“If you break through that screen, the big ugly thing you live with—the one who can’t whistle worth a damn—will skin you alive.” 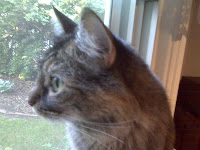 The bird flies away, leaving poor, captive Serene not licking her chops over a pile of feathers but hungry for more.

Such a perversion of the natural order of things, a bird bedeviling a cat in such an attitudinal way. Tragic, really, but ...

So it goes, all day long. The bird flies in and out, and Serene remains stuck in the middle of her own avian invasion, a 3-D bird epic that’s bound to end sometime within several weeks, when the babies hatch and fly away. And the final credits roll at long last.
Posted by Terri Paul at 7:42 PM