Based on Charles Portis’ 1968 novel, “True Grit” tells the story of Mattie Ross (Hailee Steinfeld), fourteen-year-old girl in Arkansas whose father is murdered by a hired hand, Tom Chaney (Josh Brolin), in nearby Fort Smith, where the two men have gone to buy some horses. 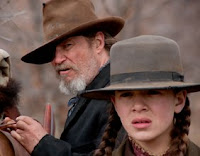 Mattie travels there to collect her father’s body and avenge his death. She joins forces with Marshal Roster Cogburn (Jeff Bridges), an aging, alcoholic reprobate with a nose for sniffing out criminals, and a Texas Ranger named La Boeuf (Matt Damon).

Eventually, the three of them catch up with the aforementioned criminal, who is wanted in Texas for yet another murder as well and has joined a notorious gang. Along the way, strong bonds form between the little girl and the lawmen.

Jeff Bridges is one of the best actors working today, and he does a passable job here. The dialogue stays true to the book, and that’s part of the problem.

During my favorite exchange, Cogburn faces down an outlaw named Lucky Ned Pepper, who has temporarily kidnapped Mattie and who Rooster has been pursuing for years. Cogburn wears an eye patch and boasts that he intends to kill Ned.

“I call that bold talk for a one-eyed fat man,” Ned replies.

I can’t even begin to tell you how many times I have repeated these lines over the years, closing my eyes, thinking of John Wayne as he rides, guns blazing, toward Robert Duvall, who plays Ned in the original film. Afterward, near death, Ned sidles up to Cogburn, winged and now trapped beneath his beloved horse Beau, and recites another memorable line.

John Wayne was an icon of my earliest movie-going days and one of the few actors of his stature with the courage (or stupidity, depending on your point of view) to make “The Green Berets” at the height of the Vietnam War. “Berets” came out just a year before the first “True Grit,” so you can imagine my shock when he trampled all over the image he had crafted in the 168 films he made before this one--and won an Oscar to boot.

Until then, I never realized he had a sense of irony, and I suppose that’s one reason why he inhabits Rooster for me like no one else can. The other reason being, of course, that he’s John Wayne, a larger-than-life actor whose booming voice has seared the wonderful words Portis put on the page into my brain forever.