A couple of weeks ago, I wrote about a mother cardinal outside my kitchen window (“Birdemic 43214")—a bird invasion that turned my younger cat Serene’s life upside-down. She nearly poked through the screen trying to get out and stayed glued to the sill, ignoring meals and invitations to snuggle.

Well, the chicks have hatched. More than hatched. They’re getting ready to leave the nest, which is much the worse for wear. Stuffing is starting to bulge from its seams because the kids are just growing too fast. 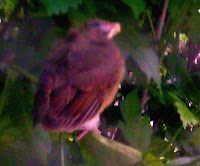 This noon, I saw one baby perched on a branch (apologies for the fuzzy picture taken with my cell phone). It looked quite scared. I had to resist the urge to run outside and lift it back into its little home. Not so mom and dad. They fluttered furiously around the bush where the nest is located and on the eaves above, chirping loudly—“come on little guy; you can do it.” The chick has a fat body and a pin head right now, and after stretching its wings tentatively, it did manage to elevate itself a couple of inches.
This tiny drama has played out with considerably more panache than its cinematic counterpart, James Nyugen’s “Birdemic,” which is currently vying for the title (unsuccessfully, I hope, against contenders like Ed Wood’s “Plan 9 From Outer Space” and, a film I haven’t seen, Tommy Wiseau’s “The Room”) of best worst movie. 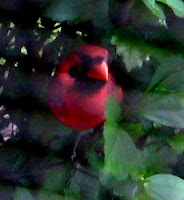 Mama cardinal has been a real trouper, weathering torrential downpours and blistering heat over the last few weeks, while rarely leaving her post. Papa has been around more lately, bringing food and offering encouragement. He and mom have been hovering, like nervous parents about to drop their children off for the first day of school.
Sadly, the saga of the cardinals outside my window is coming to an end. No car crashes or explosions. No Robert Downey Jr. in an iron suit to the rescue. Just baby chicks growing up and flying away to take their places in the relative safety of my backyard.

These birds have made me think a lot about how many things I miss because I’m too busy to notice. I’ve been wondering, too, about exactly where small tales like this one fit into prevailing tastes for the large and outrageous and whether there is a place anymore for stories about ordinary events that turn out to be kind of epic.

PS: Cardinals tend to stay within the same territory, and all birds nest via déjà vu. So I foresee “Birdemic 43214: Two” coming to a theater near you next year at this time.
Posted by Terri Paul at 5:30 PM