Well I was walking down the street just a-having a think/
When a snake of a guy gave me an evil wink/
He shook me up, he took me by surprise/
He had a pickup truck and the devil's eyes.

That’s how Dr. Frank N Furter (aka Tim Curry) sang about being yanked from one temporal dimension to the next in “The Rocky Horror Picture Show.” 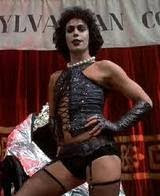 I’ve always been fond of the good doctor, mainly because his identity is so delightfully fluid. Then, too, his name is a play on the name of another doctor in one of my all-time favorite novels. He comes from Transylvania (home of Dracula, not Doctor F, though I’m sure the filmmakers knew that). Granted, it’s a planet of transsexuals and not the same small strip of land in the Carpathian basin where my mother was born. Still, I feel a kinship with FNF, even though I’m not partial to hot dogs.

This past weekend, I experienced my own time warp, not via a serpent behind the wheel of a Ford F130 but through an invitation to the birthday party of a very dear friend of mine who was on the faculty of the English Department at Ohio State when I was a Ph.D. student there.

I visit with my friend regularly. The other people at the party--I haven’t seen most of them since I graduated over thirty years ago. The more I made my way around the room, stopping to catch up on the last three decades of everyone’s lives, the more I felt myself doing “a little jump to the left/and then a step to the right.” Until it was 1979 and I was back in my old office with five other TAs, grading a stack of freshmen themes.

After returning to the present several hours later, I stopped to think about me then versus me now. Here are a few differences that occurred to me.

Back in the day, my heart thumped whenever I raised my hand in class, and I stewed for hours over the slightest misstep. I read every article that was assigned before I found the courage to put pen to tablet to express my own view about a book or a poem.

These days, opinions are everywhere, shouted from television “news,” blogged, tweeted. Amidst this cacophony, my little bitty voice isn’t even a whisper. Besides, I figure if “Sarah Palin” and “Republican presidential candidate” can be uttered together in a sentence—well, I’d be hard put to say anything stupider than that.

BEING AFRAID OF CRITICISM

As a grad student, I lived for the A and the accompanying laudatory end comments on each term paper. If the professor offered a single “but,” let alone an A- (or terror of terrors a B+), I was convinced that I was totally unworthy of being in the program.

Try working in literary fiction today. Rejection. Heck that’s my middle name, not to mention being a long-standing member of a writers’ group that doesn’t tolerate any foolishness from me. My skin has gotten much thicker—and not from overexposure to the sun.

NEEDING TO BE PERFECT

All right, that hasn’t changed much over the years. I keep on laboring endlessly over every last detail, the difference being that, when I don’t meet my own expectations, I can sleep peacefully at night, get up the next morning, and start writing again.

It's called perspective, I suppose, or just plain getting older...
Posted by Terri Paul at 5:46 PM