Like thousands of young girls in the fifties and sixties, I worshiped Anne Frank. I can’t honestly say how many times I read her diary. Tucked away in my quiet bedroom in boring old Dayton, Ohio, I imagined myself pacing her attic, arguing with her mother, staring down the awful dentist Dussell, pining for Peter.


I, too, kept a diary, but it mostly consisted of entries like, “Why won’t Judy (my older sister) speak to me? I try to be nice, but she doesn’t like me. Plus, it’s Monday, Hamburger night. Hamburgers make me barf.”

Hardly the stuff of literary immortality.

When the movie came out, I saw it almost as often as my daughter saw “Grease” a generation later. Millie Perkins was so dreamy. Besides, she got to flirt with Peter, an actor named Richard Beymer, who two years afterwards flirted with Natalie Wood in “West Side Story.” He died an infinitely more romantic death there than he did (off-screen, of course) in “Anne Frank.”

The Holocaust has always loomed large in my life. Entire branches of my mother’s family tree, people who remained in Hungary instead of coming to the United States like my grandparents did, had perished during the Second World War. The idea gave me frequent nightmares as a child.

Last month, Judy, who broke her vow of silence toward me years ago, came to town. Over lunch, she mentioned that she had recently read Victor Frankl.

“The Holocaust went right past me when I was a kid,” she said, sweeping her fingers over the top of her head. “But lately, I’ve gotten interested in it.”

“Not me,” I said. “I’ve ODed, having read every book, seen every movie. As a teenager, I believed Anne Frank was reincarnated in my body. We kind of look alike.”

“No, you don’t.” Judy burst out laughing.

I finally swore off Hitler for good, after sitting through the 1999 film “Sunshine.” Ralph Fiennes starred as an Olympian tortured and killed by the Hungarian Nazis. (My late Aunt Sarah swore they were the worst of the bunch, a point of pride with her.)

I thought I was past caring, not about the atrocity itself but about the books and movies that brought it perpetually back to life, when I learned that the Anne Frank House Museum in Amsterdam is releasing her diary as a graphic novel.

My Anne, a cartoon! Incredible. Here she is on the cover, looking out the window at the Nazis, who are largely unseen in the book and all the more frightening because they live in the shadows.

And here’s Hitler, again an indirect and terrifying presence heard over the radio and spoken of in hushed tones, plotting what? To come and find Anne? 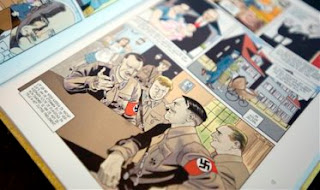 I understand the motivation behind publishing the diary in graphic form. The keepers of Anne’s legacy don’t want her to be forgotten. But I deeply regret this change of venue. Imbibing her story on a page with no pictures puts me squarely in the three-dimensional world of my own imagination. Seeing her movie removes a dimension, making me an observer, although I’m still in the front row.

But a sketch that doesn’t even look like Anne. Her words pared down to fit into the tiny space of a balloon above her head. Now, I’m in one-dimensional space with no room left to play around the edges.
Posted by Terri Paul at 5:06 PM