This is a picture of my grandson Joshua during his recent visit to Space Center Houston. Note the muscle shirt. Apparently, a boy can be a rabid Ohio State football fan and aspire to be an astronaut.

Or maybe not. Right after this photo was taken, my daughter reported that Joshua screamed, “Get me out of this thing!”


Perhaps he won’t follow in his family’s footsteps and work in the space program. Back in the day, my daughter was one of the first associates at the Visitor’s Center. I was a computer analyst.

Being at NASA during the height of the Shuttle program was heady. That was before the USSR imploded and wiser, more fiscally responsible heads prevailed. So the US was busily developing its own Space Station. I vividly remember pulling up floor boards and working my way through acres of jumbled wires, being the only woman on my team and hence the smallest person in the room, to insure the integrity of a Hewlett Packard mini (remember those!) that housed critical budgetary and project management data. That was kind of fun and a change of pace for me, since I usually performed my magic on the front rather than the back end of the computer.

On my first trip to the Johnson Space Center, as it was called ages ago, an acrobatic guard, spying the Shuttle sticker on my windshield, gestured wildly with his hands, did a pirouette, and bowed elegantly before waving me through the back gate. After such a glorious welcome and a quick drive down a flat road, I saw a Saturn V rocket resting on its side in a large open field.

It was huge. Gleaming white with big black letters. And it had ferried people to the moon. I couldn’t take my eyes off it, and for a couple of months, at least, I felt like pinching myself whenever I drove by. I was a part of the great space adventure.

Then, time passed, and I got so used to the Saturn that I barely noticed it. Sigh…

Fast forward fifteen years. I gave up my job at NASA. Family obligations brought me back to Ohio, where I kept on programming computers and also started writing fiction. All my life I had dreamed of publishing a novel—my own fractal version of a trip to the moon, an impossible, otherworldly voyage that, through hard work and luck, finally happened. 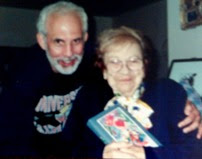 Entering The Little Professor, a now-defunct bookstore here in Columbus, for the first of many readings right after Glass Hearts was released, I was as bowled over by the stacks of my book sitting near the front door as I had been by the Saturn rocket. I was giddy as I glanced at this picture of my aunt, who gave me her story, and my husband, who supported me every step of the way. The book, the readers, the speaking engagements, the awards. The entire experience was life-changing, my own small “giant step.”

As the months wore on and my appearances at bookstores and events multiplied, I got so used to seeing Glass Hearts on tables and shelves that I had to pinch my wrist, once again, to remind myself how far I had come.

These days, Glass Hearts is still on Amazon. About a month ago, as I was redesigning my web site, I checked the link to the book and discovered that the on-line stock had dwindled to one and that more copies were on order. That means people are still reading it after all this time, which made me very happy.

As for the Saturn V, muggy Gulf air, along with aggressive weeds and mold, threatened to eat the rocket, which has been refurbished and now lives inside this trailer. Somehow the romance is gone.
Posted by Terri Paul at 11:10 AM