They’re tearing down my high school: Friendly Fairview, a lovely old building on the north side of Dayton, Ohio constructed sometime during the 1920’s. Her asbestos slip is showing, and apparently it’s cheaper to toss her in the trash than to stitch her hem back up again.

The last-walkthrough of the building is scheduled to take place on Saturday, September 18th. There has been quite a bit of chatter about this event by FHS alumni, including some outrage amongst the “Jewish kids”—now grandparents—because it takes place on Yom Kippur.

High Holidays aside, I don’t really think I have the heart to go back and rake over the bones. Not that I enjoyed high school all that much. I didn’t. I remember an exchange with my mother one afternoon when I was a sophomore that went kind of like this:

Why aren’t you having more fun? These are the best years of your life.

Give me the gas pipe.

Still, I do think fondly of the building. I remember the light and airy main hallway, where I had a locker my junior year. Seniors were luckier. They dominated the back hall near the school radio station, where a couple of friends and I once sang “Chattanooga Choo Choo” during a morning broadcast to promote the Freshman Follies. So glad THAT wasn’t preserved for posterity.

The big stairway to the second floor, where my future husband and I had what he remembers as a movie-moment conversation, was quite beautiful. It was lined with stained glass windows. (There’s a movement afoot to put those windows away for safekeeping.)

I especially remember the bulldog, our school mascot. He stood just inside the cafeteria, eyeing ladies in white uniforms who loomed large and filled our plates with glop so unappetizing I finally resorted to brown-bagging sandwiches—highly uncool—or forgoing lunch altogether. Back in the day, the bulldog seemed much fiercer than he does in the photographs that remain.


As icky and never-ending as it was to live through the first time, I often find myself returning to high school in my writing. I use my experiences at “Friendly Fairview” every time adolescence pops up in a story or a book, and pretty directly in both my unpublished novel Almost Grown and a worm-Ouroboros, infinite-loop science fiction short story I wrote years ago. 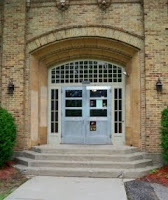 Whenever I see pictures of my old classmates or hear news of their activities, the tape rewinds, and I’m hurrying through those doors again, late for Accelerated French, where I'll struggle with verb declensions and feel “so out of it I'm not even out of it,” which is how I describe who I was in high school. It’s almost as if the intervening years never happened.

But they did, of course. I have a husband, daughter, grandson, a few careers, and a personal history I’ve used to write short stories, novels, even this blog to prove it.

So I’m content to let Friendly Fairview live on in my imagination, fueling future anecdotes and stories, prospering long after the brick and mortar building has passed into history.