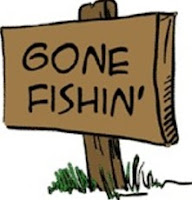 My motivation to write has nosedived, especially after I spent most of last week in Cleveland. Granted, it’s only a two-hour drive from Columbus, and there’s no time change. So that can’t be the reason why I’m suddenly besieged by an attack of the lazies.

The weather is cool, and that’s supposed to be energizing, right?

Wrong. I had such a nice time away that it’s been hard to get back into a groove. I could understand that better if I had gone to Iceland like I hoped to do, before scheduling conflicts and other things, such as travel arrangements and money, got in the way.

So my husband and I opted to visit another place ending in “land” that’s a good bit closer to home.

And guess what? The downtown area sort of knocked my socks off. It’s like miniature Chicago. Not surprising, since Daniel Burnam, the architect mainly responsible for the 1893 World Columbian Exposition, also had a lot to do with developing the public square that dominates the lakefront. Here's a picture of the famous tower that gives Tower City its name.

Lovingly preserved Beaux Arts buildings abound. Case in point. I stayed at a hotel that had a spectacular lobby featuring marble columns and filigreed ceilings. When I went to the ATM at the bank next door, the interior was even more eye-popping. Gargoyles, a gilded clock and doors. Here's a photo of the interior of Tower City that looks like a lot of the insides of downtown buildings.

All of this beauty contradicts the dyspeptic portrait of the city in movies like “American Splendor.” (By the way, I ran into a service for the late Harvey Pekar being held Lakeview Memorial Park, one of the most elaborate and tranquil cemeteries I’ve seen in this country.) 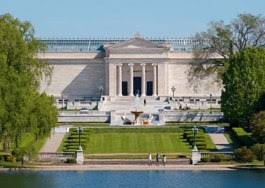 The real treasure, though, is the Cleveland Art Museum, which keeps getting bigger all the time. After a long trek through the exhibits, I sat down on a bench in front of one of Monet’s late water lily paintings and was promptly joined by an older woman pushing a walker.

We struck up a conversation. What a story she had to tell.

She’s ninety years old, though I assured her she didn’t look a day over eighty. Minus the walker, I might have taken her for someone even younger.

She came to the US from the Ukraine when she was an infant, and from the time she was five years old, she and her mother took the trolley to the museum every Saturday.

She herself became an artist and, among other things, a docent for forty years, teaching generations of classes to children who passed through the museum school. When she turned ninety, the museum threw her a party!

I asked her why she thought Monet had moved so steadily from representational painting as a young man into the highly abstract work of his last years, why his color palette became more muted.

She said she didn’t know, but the same thing happened to her. Recently, a friend had asked for one of her paintings that hung on her living room wall. Not wanting to part with it, she did a quick water color of a bowl of fruit on her kitchen table.

“It didn’t look much like fruit,” she said. “Just cranked out an idea I had in my head.” 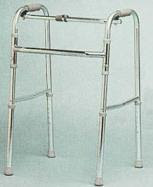 Her advice before she stood up, balanced herself on her walker, and toddled off: find a favorite here, remember what it looks like, and tuck that memory away for safekeeping, because you never know when you might need it.

She’s right, of course. As a writer between books, I’m absolutely sure she is.