Sometimes a director is the right person to tell a story. Such was the case with Danny Boyle’s last film, “Slumdog Millionaire," winner of eight Academy Awards, but unfortunately not with his current offering, “127 Hours.”

The movie is based upon the real-life experience of Aron Ralston (recounted in a 2004 memoir with the groan-inducing title Between a Rock and a Hard Place). Hiking alone in Utah’s Blue John Canyon, he fell into a crevasse. His right hand was pinned between the canyon wall and a large immovable boulder. After winching himself into place, he survived for five days with almost no food or water, until he…let’s just say he did some creative surgery on himself, got free, and staggered to safety.

“127 Hours” features a masterful lead performance by James Franco. He made me laugh in one breath, as he interviews himself about the sheer hopelessness of his situation, and gawk in the next, as he experiments until he finds a comfortable resting position for what promises to be a very long stay.

Once he is trapped, the camera stays tight on his face, with two exceptions—one that works and one that doesn’t.

The one that works: the breathtaking way the film captures quiet daily events, a brief burst of sunlight each morning or the flight of a bird. The director steps back and lets bright orange rays and the gentle flapping of wings do the work for him, transforming the mundane into the miraculous. The story and its telling become a perfect whole, something all writers aim for. I’m inside that crevasse along with Ralston, clinging to every last vestige of my humanity.

The exception that doesn’t work: well, Boyle has an hour and thirty-three minutes to fill with a main character who has no one to talk to except his portable camera. So the director punctuates the narrative with jarring flashbacks and dreams, often presented in garish colors and accompanied by a grinding, propulsive score that never failed to remind me I was sitting in a darkened theater, watching someone else’s story on a big screen. All that noise and jump-cutting took me right out of the movie.

Sustained, natural sound in that canyon, if used to good effect, would have been much more frightening, as it is during one scene when Ralston endures a torrential downpour as loud and massive as ten computer-manufactured tsunamis. For a couple of excruciating minutes, I thought he had actually drowned, slowly and painfully. I wanted to look away, but I couldn’t.

How I wished Boyle had had the courage to stick with what Ralston heard and saw, as hunger and thirst threatened his grip on reality. Wouldn’t the wind have been soft and eerie, his hallucinations a surreal mash up of the here-and-now and the way-back-then? Granted, the movie might have required me to pay closer attention, but my identification with the character would have been more complete. 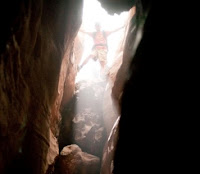 I kept wondering why Boyle didn’t trust his story enough to let it unfold organically: a guy alone, struggling to hang onto his life, in spite of the intractable boulder that’s slowly killing him. What could be more hair-raising or utterly riveting?
Posted by Terri Paul at 8:29 AM